I got to spend yesterday at the IoT 2014 forum, in Cambridge, listening to some fantastic speakers and getting to meet lots of really interesting folk starting up, building businesses and engineering new technologies.

Having made the epic move of developing a fresh business plan, and focusing solely on a new product, our web store (www.makerbase.co.uk) and paring back all our services to just those we love (i.e. to just autonomous systems) - the process has felt really daunting, but it was greatly reassuring having spent a day with IoT investors and entrepreneurs alike.

I've been involved with IoT projects in some form or other, on and off for over a decade now. From networking animals to building-integration projects, it feels like I've been there, done it and earned the T-shirt. Having spent 14 years explaining to people the connection between web applications and physical devices - whilst I'm still having to explain it to the majority of people I meet - there is now an ever growing community who I don't have to explain it to...

Though really, is it such a big stretch to see the connection between web apps, networked devices and network platforms? I recall a meeting with a software company back in 2006 - they couldn't understand why we were working with embedded hardware, we built web applications, and - like this one was really difficult to understand - operated a network platform.

To really confuse these people, now we have a store for makers. So we write code, sell widgets and have a network. Mind. Blown.

It's only been in the last 12-24 months that the community has really been tagging projects in the industry with the term 'Internet of Things' (a term I suspect will continue to evolved and changed over coming years), in place of the disparate terms often used, ranging from those as vague as 'connected' to others as equally vague as 'networked'. As was highlighted yesterday, people aren't looking for randomly connected devices, but things that solve or simplify a problem.

Somewhere around 2008-9, we retrofitted a datacentre with networked power distribution and monitoring along with network environmental monitoring (temperature/humidity probes, door sensors etc). It had taken nearly a year for the board and IT staff to even understand the benefits it had for them, luckily it took the new COO about a week to understand and convince the board otherwise. From a web dashboard, the IT staff can reboot a dead machine, monitor power at server, rack and suite levels, and track the movement of staff and visitors through the building.

As a toolset that's pretty powerful, but once you add logic and automation into the fold, things get really interesting. The system can now control the cooling systems dynamically, adjusting as system load increases or decreases. Whereas once the cooling was set to 'max' with a frosty 16C in places, with networked sensors, the system can determine the cooling needed in each cooling zone, allowing the temperature to be raised closer to an optimal 25C - massively reducing power consumption in the process.

I think the most vital thing is to educate people to the benefits of connecting things together - whether you have an application or use for the data now or not. Once you have it, you'll always find something to do with it...

I know this is a departure from my normal making/breaking things blogging, but in my mind all these things feel linked, so seems a good a place as any blog.

Expect posts of me making and breaking stuff later this week.
Posted by McCoy at 18:44 13 comments:


With some of the chassis we have in our datacentre, the majority of drive bays are designed for 3.5” HDD, so it’s a pain when we need to configure a lightweight server or appliance with an SSD.

Whilst the chassis can be upgrade or modified to take 2.5” drives, with the prevalence of big and cheap 3.5” drives, there’s no real cost justification. The other frustration, is that the majority of off-the-shelf (aka “the eBay special”) adaptor plates don’t do what we need, or place the 2.5” drive in the wrong location or have expectations for particular mounting styles.

Yeah, let’s just jump to it (anyway, the title was a bit of a give away). We're now 3D printing all the custom brackets and widgets we need - on-demand and to specification. We're building a library of parts as we go, so if we don't have something exact, we can modify and tweak existing ones. Need a cable slot? Added. Need a zip tie anchor? Done.

Any downsides? As the internal temperatures are nowhere near the melting point of the plastics we use, that issue can be discounted straight away. We've not used any to electrically insulate or where it might bridge terminals - I still need to dig out material datasheets to check the dielectric properties of the plastics, but given how many Pi cases we make and use, we've not seen anything bad happening so far and not likely to in a server case either.

Volume? Well, if the brackets are designed well, then volume isn’t normally an issue. A hulking chunk of plastic is expensive whether 3D printed or mass-produced - if the general practice is to screw an HDD to the chassis plate, then the standard is already set pretty low. Getting the design right is organic, so you start by solving the immediate problem and iterate forward as you go.

As I write this, I’m just waiting for a new bracket to print. We’ve got a number of custom network appliances, which whilst designed to take 1x 3.5” or 2x 2.5” drives, has a bracket that needs a 3.5” drive to hold it together. Pretty dumb really.

Do we want to have custom metal adaptors made for these? We’d need to order circa 200pcs, plus the design and engineering costs for the prototypes. Since we need only 5 sets, don’t think that’s economical.

In 20 min, I’ve been able to draft and model a part to exactly fit the brand of drives, the bizarre mounting points in the chassis and sufficient space for cabling. And 10min later, I have a prototype screwed to an SSD and into the case. Marvellous.

Well, I exaggerate. That’s my second prototype, as I found I placed the SSD mount holes 1mm off axis. That’s an “oops” now, but if it were a box of 200 metal brackets, thats an “Oh f**k sticks, I've just wasted a bundle of money. Arse.”

In an effort to reduce the number of ‘vanity’ parts used in the data centre, we’re printing lots of different pieces in lieu of expensive plastic (or metal) components, to do things from holding LCDs and LEDs to mundane cable management and hard drive mounting. The main rule, is to keep the part functional - I like to think a well designed and engineered item looks good anyway, voiding the need for vanity parts from the outset.

I suppose this just highlights the beauty of on-demand fabrication and manufacture - instead of wasting days and weeks on rather pointless 'projects' (I use the term loosely), in under an hour I can identify a problem, develop a robust solution and be onto the next task. Nice.

Edit: on a side note and extending the idea of on-demand fabrication for production not just prototyping; Google's new modular concept phone, Project Ara, would be 3D printed using production grade machines they're designing.

Yeah, I've been a bad blogger. No posts since November?

I have, however, been busy with lots of lovely projects - many I'll try to post about over coming weeks. I've caught up with a few projects, shelved a few and started too many new ones. One that's taking pride of place, is my 3D printed InMoov 6ft humanoid robot. It's amazing how people start bugging you less, when you have a humanoid robot standing behind your chair, facing the door and occasionally shaking it's head. 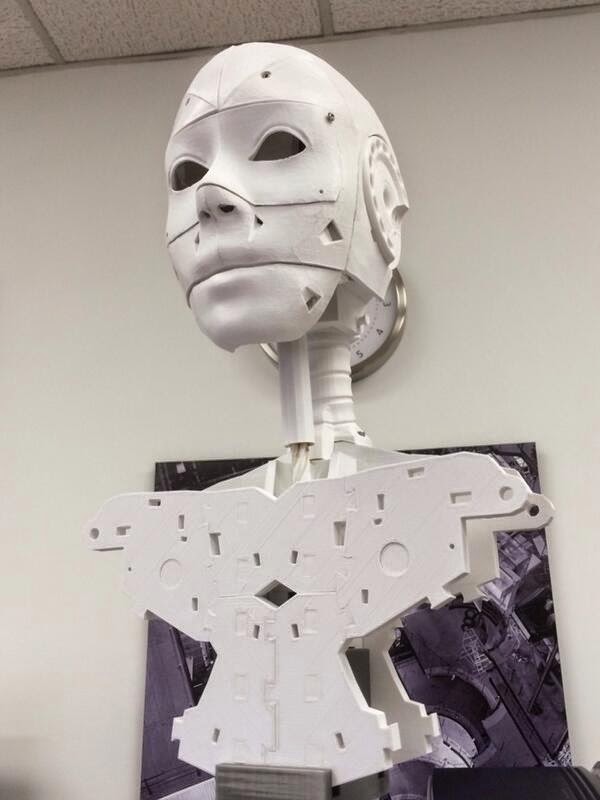